A couple weeks ago, Nicholas had to go to the dentist for a filling and ended up having a baby tooth with a cavity pulled. The dentist did not give him his pulled tooth so Nicholas wanted to write the Tooth Fairy a note and explained everything that had happened. 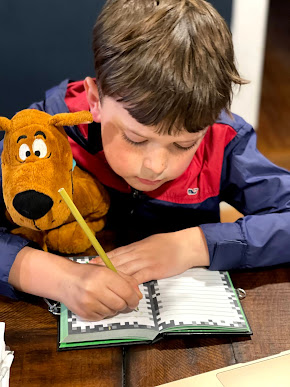 But, he told me he did not know how to spell all the words and asked me to write the note.

Well, I refused! It is not my story to write--it is his. Plus, it broke my heart a little that he thought he could not write simply because he could not spell all the words. I mean--what a sin to miss out on a telling a story because you think you can't. We can all tell stories! And stories are best in our various voices.

When I was a young writer just getting used to telling people I was a writer, one of my biggest points of pride was my extensive knowledge of the AP Style Book. I was like some sort of intolerable style nerd spouting my trivial style book knowledge.

Now, 20 years later, I barely care about the style book. Sure, I like things consistent and buttoned up for my paid writing--but that is absolutely the last step in the process.

Writing, friends, is much more than spelling or grammar or writing down the "right" words or the wrong words. I think writing a story has very little to do with those things. Writing a story is all about the story! You can use spell check and dictionaries and editors and Grammarly to fix all those technical things. You can double check the style of numbers of salutations and countries and cities. And you learn how to navigate grammar and spelling as you grow. Those technical skills should never get in the way of writing your story--ever.

So I explained to Nicholas the process of drafting and free writing--the written explosion of stories and ideas that has to happen in the absence of fear of misspelling and missed commas.  Drafting should be the sprint and you should never look behind you until you are completely and utterly out of words. And even then, when you think you have nothing left, write a little more.

I showed Nicholas my draft folders on my laptop--there are so many and so many I may never look at again. So many of my draft make very little sense and even more are simply and tragically grammatical incorrect, with spelling errors and misused words. But, it's fine. Because drafting is also practicing and we all know that we can't be good at anything unless we try it out, repeatedly.

I made Nicholas sound out "Extraction" and do it quickly, so he did not lose any of those story ideas he had bouncing around his head. The letter, in the end, was filled with errors and misspellings, but it told his story of the extracted tooth.  He explained the empty plastic tooth case, the potential "biohazard" of his pulled tooth and how he thought it was sort of "disturbing" since the tooth was just in his mouth but he still wanted his "tooth payment" and if the tooth fairy wasn't willing to make good, she could "write a strong letter to the dentist about it." He told her she was very good at her job and promised to always brush his teeth.

It was perfect and it was his and since I am the tooth fairy, it is now mine and one of my favorite stories of all-a first draft by Nicholas, a young writer just drafting his stories in his journal.