Because we failed them both (Day 110)

I would be remiss if today I did not write something acknowledging the verdict in the Derek Chauvin trial. Part of me feels like it is not my place--that I am just adding to the noise and maybe I don't have anything more to offer to the conversation. Or even more precarious, what if what I have to offer is wrong--and not exactly what I should be saying. 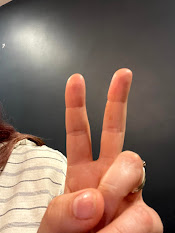 But, that's a huge part of the equity problems in this world, isn't it? So many of us feel like it is not our place to say anything.

Of course, that's a lie we tell ourselves. This is our world. This is our place. If not you or me, then who is supposed to say something?

For a year, we've been talking to our kids about George Floyd. Before George, there was Trayvon Martin. I don't know what it is in particular about Trayvon Martin that has stuck with me over the years--but his name has been in my heart since he was killed and every single time I put on a hoodie, I think of him.

It's disgusting. And today, justice was done, but in the end it is meaningless unless we stop failing each other. We failed George Floyd and truly, at some point, the world failed Derek Chauvin, too. We breed racism and violence and hate. We create criminals and murderers and then we point at them and render our verdicts-but then we do not turn and look at ourselves.

The world created Chauvin--we are to blame for allowing that man to become a murderer. We are to blame for the racism, for the system that celebrates arrests and chases and warfare in our city cities, for the world in which marginalized people are not heard--but instead treated as if they've been given the same advantages of the non-marginalized and for the atmosphere of silence, which is compliance, in the end.

As a woman who has felt marginalized as a mother and a sister--I can tell you that when people do not believe your story, it breaks you and it further separates you from others. When people try to argue or attack your feelings of difference, it is enraging. I have experienced this world as a white woman. Who am I to say what the experience of a black woman is?

If my black friend tells me that she fears for her sons as they grow into young adults, I am going to listen to her, I am going to believe her and I am going to try to do something about it. This friends is the truth that we need to hold close always.

We have to listen to each other. We have to believe each other. And we have to work together to make it better. We are not enemies--we are people with different stories. I firmly believe we can write new stories--better, equitable, non-violet stories.