We celebrated with a fantastic party (one that I was not officially invited to; she's a teenager now!). It was a wonderful night. There is nothing I love more than throwing my kids a birthday party. I think birthdays are just so special and every year, they only get more special. 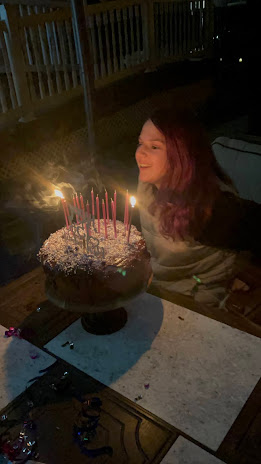 Every once in a while, I feel a little mournful twinge about the fact that my kids are growing up. But, it quickly passes--because this is what they are supposed to do and every passing birthday feels like a beautiful victory, especially for Lily.

Her very first birthday was a Pink Poodle in Paris themed event. I ordered 5 dozen balloons (no idea why, it left very little room for the guests) and we had an amazing feast of quiche and salad and of course, cake.

That is the rule to a good party around here: the cake must be great and there must be a theme. I love nothing more than throwing an elaborate children's party, inviting as many people as possible and have a good time celebrating! I love going to birthday parties too

Lily's second birthday was cowgirl themed (and a friend made a guest appearance off-theme, as Elmo). Three was a princess party (Sleeping beauty was scheduled; but needed an emergency root canal, so we had to settle for Belle). Four was Princess and the Frog (Lily wore her Tiana dress for one solid year). Five was Strawberry Shortcake (she dressed as Strawberry Shortcake, red wig and all) . Six was My Little Pony (and an incredible rainbow cake!). Seven was a Spa-Pajama party (with manicures and pedicures for everyone!).   Eight was a Glow in the Dark party (which turned into a total house party. I think our house had 30 kids in it).  Nine was another Paris party (guest made their own perfume). Ten was her first Sleepover (we popped a balloon every hour to find a new activity). Eleven was a Cupcake Bake off (and are kitchen was filled with all the girls in 5ht grade at Van sciver). Twelve was a Sleepover/spa party (we made bath bombs!). Thirteen was a Surprise murder mystery party (she was really surprised!). Fourteen was Hibachi and an Escape Room (and the day before the world shut down for the pandemic).

This year, the theme was TikTok and the cake red wine chocolate with raspberry butter cream and chocolate Grenache (a special order from the birthday girl herself!)

These themes may seem silly--but I like looking back on them all as road markers for the things that Lily loved. She really loved Princess and the Frog--to the point of wearing her Tiana dress daily. For thirteen, she was so surprised and it was so marvelous to welcome her into her teenage years with a dramatic, creative party with her theater friends.

I love celebrating her--and her siblings. And I love that we all throw these parties together---for each other.  Because that is what it is all about every March 13 and January 24 and December 11--celebrating each other and the beautiful family that was made birthday by birthday.

And Lily, she is the leader of it. Our beautiful first born, who is just filled with so much love for us. Happy Birthday Lily!