On the Privilege of Rowing (Day 86)

Today, when Lily was getting ready to go to her first crew scrimmage, I felt compelled to pray over her.  I've prayed over her so many times before in dire, terrifying situations--in the NICU, in the ER, in the PICU, in the operating room waiting area, in the MRI sedation room, in the ambulance a year ago when she shunt failed--but today was the opposite of dire--it was joy-filled! 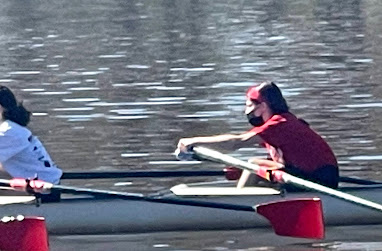 Lily looked at me and said, "Mom, we aren't those kind of people. We are not from the South."

I looked at her and said, "We live in South Jersey, now close your eyes."

I could not pray out loud because the words were choked up in my sobbing (I cried 23 times today).

But, figuring God can hear my prayers, even those I am unable to say out loud because of hysterical sobbing, I held Lily tight and prayed. . I prayed for her protection. I prayed with a heart overflowing with gratitude. I also prayed that every stroke on the river and every moment with her team today was done to glorify God the Father, our Creator and Redeemer. I prayed that my daughter would always remember how this moment almost wasn't hers because rowing is a privilege and she should never waste it. I prayed I'd never take for granted the privilege of seeing my daughter survive and thrive.

On May 16, it will be 14 years since Lily was diagnosed with ependymoma, a type of pediatric brain tumor. She was 14 months old.

The day Lily was diagnosed, I had two questions for neurosurgery. They walked into our room in the CHOP ER and told us her brain surgery time for the next day. I needed to know two things:

2. And would she be able to walk and talk?

The answers to both questions were yes. But, I didn't believe him.

My baby had a tumor in her brain and was having brain surgery. There is nothing in this world that I can think of that is more terrifying than those two things. I still cannot think about those early moments without shaking--those moments are the moments when I felt brushes of true evil in this world--the evil of cancer and the brokenness of our bodies and the darkness of fear.

How could she ever possibly survive and thrive?

But, of course, she did survive and I don't think there is a moment that Lily hasn't been fighting to thrive. She couldn't walk after surgery--she couldn't even sit up. But, then slowly, after endless hours of PT and OT and constant pushing, she took her first steps with a little therapy walker. At that point, her rehabilitation doctor made it abundantly clear, Lily had peaked, we should not expect her to walk without a walker or crutches, ever. This was it.

Then, another year and change, and Lily took her first independent steps all by herself in Nordstrom. We spent an entire evening in the Mall, while Lily ran away laughing. She was 3 years old.

Walking, friends, is a privilege. I never thought of it that way until Lily. But, legs that work are not guaranteed.

And rowing on the Cooper River on warm March Saturday, that is a privilege--one Lily worked for since the moment she took her first breaths, through brain surgery and radiation, hours and hours of therapy and 6 days a week rowing on the River.

And I am privileged to able to pray over my 15 year old daughter, who is stronger than I'll be and have her laugh at my joyous sobs and dramatic prayers. I wouldn't have it any other way.

(I am signing off now to sob again.)