Dick Hoyt died yesterday. Dick was the father in the father-son duo Dick and Rick Hoyt.  Rick, his son, had cerebral palsy. He was non-verbal and could not walk or use his legs. People encouraged Rick's parents to institutionalize him. 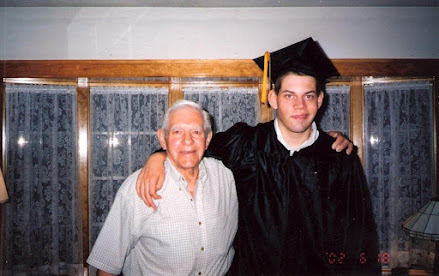 They didn't. Instead they believed in him--getting him access to technology that allowed him to communicate and then, Dick started running with Rick. He ran while pushing Rick in a 5 mile race. After that first run, Rick told his Dad it was the one time he felt like he wasn't disabled.

The rest of the story is incredible--Dick and Rick trained and qualified for the Boston Marathon. In an old interview I heard today, Dick said the Boston Marathon organizers were not easy on them. The duo had to qualify in Rick's age group (which was then 20-something) but Dick was in his 40s. They did it and the rest, well, I think the rest of the story empowered families dealing with disability and difference, and in turn, changed the world a little and changed my world a lot.

I think of the Hoyts a lot. Dick's love and devotion to his son, reminds me so much of the relationship my Dad had with my brother, David. David had an intellectual disability. He was non-verbal, had a seizure disorder, some sensory issues and while he was fully mobile, he had muscle tone issues that affected his balance and his gait.

I hate writing that. But I know it is true. It was true when we were kids on the playground and other mothers would not allow their children near David. I used to yell: "It's not contagious! But I wish it was because you are awful."

Once, when I was around 11 or 12, I was spending time at the park in my grandparents' neighborhood when some boys my age decided to mimic and mock David. I yelled and I yelled at them until I was purple. I hated them so much in that moment. My brother just wanted to play.

I ran and told my Nana and she did nothing--she told me to ignore them.

I told my Dad and he hugged my brother tight and told him: "It's okay big guy. You aren't what they are, you are better."

It was my father's love and devotion for my brother that made his life so beautiful. When kids at church mocked him in Sunday school and no one cared enough to stop it; my Dad refused to leave the minister's office until those kids were not in Sunday school anymore. When David wasn't invited to birthday parties or social events, my Dad found social networks for David. He never stopped advocating for him at school. He worked for hours to ensure that David would graduate from high school--in a cap and gown and then would have a meaningful job and life afterwards.

For my brother, so much had been taken away by his disability. But, my Dad always did his best to make sure the world did not rob him of more things.  I don't know if anyone ever really knew how much my Dad did for my brother.

My Dad once in a while would mention Dick Hoyt. I remember him saying to me once or twice, "Man, I wish I could run." My Dad wasn't a runner, but every time he put on Lawrence Welk for my brother--you could just see it: David wasn't David with the disability anymore, He was David who loved music.

I think the story of Dick Hoyt's love and devotion for his son changed the world a bit for my father. It wasn't that my father would not have been devoted to my brother without knowing another's story, it was just that he had a peer,  a friend he'd never meet who reminded him how much his devotion and all the exhausting, emotional hours were worth it.

There is no limit to my belief in my children--there is no bridge I won't cross for them and in the moments when I've had it with yet another IEP argument or I am feeling crushed from the side effects of cancer in my daughter, I think of brother and my Dad and people like Dick and Rick Hoyt. It reminds me how much this devotion is worth it and how much is made possible by it. It carries us across finish lines, energizes us through fights and embraces us when we despair. It is beyond just one man's love for his son--it becomes our love for each other.