I was mindlessly scrolling through my IG feed while avoiding writing my daily Yoke entry, when I found the most amazing photo of myself shared by the band Jet.

If you don't know who Jet is, their super popular song is "Are you gonna be my girl?'

I shared the photo on my IG the night before Thanksgiving last year. Mike and I were organizing our photos that night and we found a nice little stack of photos from a trip we took to New Orleans in 2004. Mike won tickets from a radio station--they flew us down to New Orleans and we got to meet Jet and the Vines and be part of a concert that later appeared on MTV.  It was a fabulous trip! And Jet is such a fun band. And I watched the MTV recording a million times and saw myself in the crowd, at the stage.

Obviously, I always find a way to be by the stage!

Anyway, I still remember what I wore: a black silk tank with pink lace trim that I picked up at Banana Republic and my Lucky brand jeans.

We met the band before the show. Mike took the picture. I recall being specifically told not to go behind the table; but going anyway, because I don't really like rules and the band said, "come back here LOVE," in their Australian voices and Mike was also like, "Yeah, go," so off I went.

As my friend Brooke mentioned, my smile is CLEARLY the focal point of the picture!

AND NOW, almost two decades later, I am INSTAGRAM FAMOUS.

Of course, the band's social account did not ask me to use the photo nor did they tag me or the photographer (Mike). I just found it myself! So, my Instagram fame is relative. I figure one day something really embarrassing with happen and I'll go viral. Anyway, it would have been lovely to be tagged when they just lifted the photo directly from my feed (where I TAGGED THEM), but maybe they do things differently in Australia.

Now, would be good to mention that on Getty images you can buy photos from that show for $499. Or just head to @Trish_Adkins and get it for less than a song. 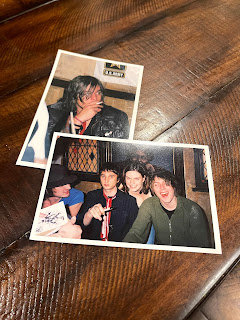 BUT, obviously I don't really mind at all because the gift they gave me is something to write about (I had nothing tonight! So thanks Jet the Band and your social account!!)

I miss live music with thousands of people all dancing and singing and screaming and laughing and drinking together. I miss that energy. My very first concert without my parents was Lollapalooza at FDR Park in South Philly. I was 16 years old. I went with two of my besties. My dad only said I could if I promised to stay with my friends. (I firmly recall him saying, "When I was your age, I went to war. So I guess you can go to a concert in South Philly. But promise to stay with your friends! You are girls from Bucks County, war might be less dangerous! Stick together")

I lost both of them when a mosh pit formed during the Breeders. I think one of us decided to crowd surf (which is like really gross in retrospect). We had been on site for approximately 11 minutes.

But then, somehow, I found other people from high school and stayed with them and then later found one of my two original friends in the crowd. My third friend, who was also our ride, was later found at her car, she was about to leave us there, because we took too long to come out. (That was an uncomfortable conversation.).  She had lost her shoes, but apparently like us, HAD THE BEST DAY EVER. (and we never ever told our parents what really was going on at Lollapalooza).

I miss mosh pits and crowd surfing. But, I don't think I should ever mosh or crowd surf again, because of my advanced age. The last time we were at a show with moshing was Pearl Jam in late 1990s. We saw them at Randall's Island in New York. Mike was kicked in the head by a crowd surfer and I had to revive him quickly so we would not be taken out of the fun by security/the medics. It was a gamble--but Mike's still alive and well and that was also like THE BEST CONCERT EVER!

I've lost count of how many shows I've been too--but Jet was right up in there in my top concert list as was the Chainsmokers a couple years ago and Live at the Chameleon Club in Lancaster. I love seeing bands at small, club-like venues.

But, my favorite band, of course, is Pearl Jam. The last time I saw Pearl Jam was in 2018 in Seattle. We went to two shows and it was like coming home. (I think Seattle is my spiritual homeland and absolutely perfect minus the fact it is not New Jersey.) We had tickets to see them in Amsterdam in 2020, which was cancelled. We now have tickets for London this summer, but I don't know if that will happen--but I am prepared to relocate to England and quarantine for as long as necessary if it gets me at a concert!

I am always dancing, screaming, spinning, singing and really getting my money's worth. As my peers have reached middle age, I've started to notice that some of you actually sit down at PEARL JAM concerts. Just know, in these situations, I've texted stadium security and labeled you a threat. Because you are a threat to all things rock and roll.

I abhor people who sit down at concerts--except if you are like at the orchestra or the middle school band concert, then please for the love of all, sit down! But, if you are in a stadium for a rock concert, GET UP (unless you cannot and then, let;'s get you to the front row or in VIP seats because everyone deserves the best concert ever).

We all deserve live music--here's hoping 2021 is the year I can return to reporting seated attendees at rock concerts to security. In the meantime, I hope Jet tags me on Instagram!