Today, I got to be choir parent. This is a special privilege--because no one is really allowed in the church very often anymore. Getting inside, even if just for 30 minutes once in a while helps me remember the time before we were pandemic people--a little tiny glimmer of normalcy even if we are masked, apart and in a much, much smaller group than before. 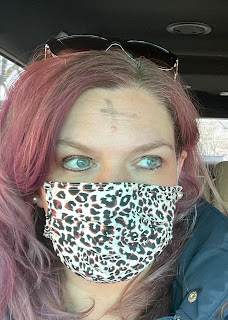 After singing one of their songs, Nicholas announced that the song was about the dude next to Jesus, the one, he said, who was also on the cross and asked Jesus to remember him.

The story, which is in Luke 23, goes like this: One of the thieves denounces Jesus and the other, proclaims Christ's innocence and does not ask to be saved from death on the cross, but instead he asks to be remembered when Jesus enters his Kingdom--the Kingdom of Heaven.

This story is one of the reasons why I find Lent so hard. I am not sure which thief I would be--the one scoffing at the man sharing my fate or the one with his eyes opened to something I cannot fully imagine experiencing--Jesus Christ right next to him. Would my eyes be open or closed?

When I think back to the times I have prayed my hardest--when Lily was sick and my brother was dying--those are the moments when I am the thief asking: "Remember me. Please, remember me,"

And in those tough moments, Jesus always has. The day after Lily's brain tumor diagnosis, when Mike and I were walking back to her room from a terrifying and honest conversation with her neurosurgeon, we ran into one of the doctors who had admitted Lily to the ICU. I was mad, so mad at God for what felt like a rebuke--had He forgotten me? Had He forgotten the baby who had just celebrated her first birthday after being born 11 weeks early and spending her first 7 weeks in the NICU? That doctor--a woman who's name I don't recall--stopped us and asked us, what was wrong--what was it that made us look so broken?

And I remember thinking--how can she not know--she was there--she knows what we are up against. But, Mike told her--Mike told her what she did not know: that the time with neurosurgeon did not bring us closer to hope, instead we were further away.

I'll never forget her face and her hand on my arm. She simply said, "I'll pray for you."

I never saw her again. But, I never forgot--through the whole journey with Lily that Christ remembered me.

When my brother was in the ICU and every rational and emotional part of me knew it was hopeless--even though everyone was praying and doctor's were working--Mike's Aunt Lydia called me to pray. She is very good at prayer--and she can pray at length--at some point during her long prayer--a prayer for healing--I had this overwhelming feeling that we were praying for the wrong thing. We needed to pray for someone else--someone who needed the gifts my brother's own end would bring. It was this miracle--not the one I wanted--but the one God could work--that reminded me, Jesus remembered my brother--and he remembered someone else's brother too.

As I move through this Lenten season that I find so hard; I want to find normal, quiet, non-crisis moments to listen more. I doubt the moments I shared are the only times when Jesus has whispered: "I remember you." Those moments are just the only ones when I was listening.

So, before I go, after this very emotional (I am crying and I hate crying.) Yoke, I cannot leave without adding a plan to make these quiet moments possible. I am still meditating each day. I am saying No and being honest in my bandwidth (both emotional and actual). I am pausing here and there. But, to draw closer to God, I need to sit with His word. And lucky for me, my church created a Lenten Devotional, written by our church community with short devotions and prayers for all of Lent. You can download it here and follow along, too.