Still Confused About the Day of the Week (Day 49)

Apparently, tomorrow is Friday, which is a blessed, blessed event.

However, since Monday Tuesday, I've been a day behind.

Like yesterday, even though I knew it was Ash Wednesday because I went to get ashes for Ash WEDNESDAY, I still thought it was Tuesday.

I even went so far as logging into a regular call I have every Tuesday; one that I was indeed on the previous day which was Tuesday, but in my memory was Monday. 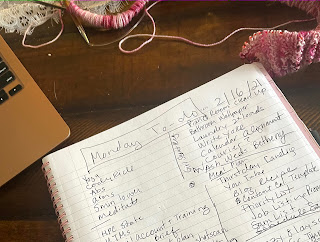 Are you following along?

I hope, because I am absolutely not following along.

This week is almost a wrap and I am still very confused about the day of week. I know there will be at least ONE person who will comment on this blog post on Facebook with the correct day of the week (which is Thursday, I just looked at my Apple watch, but what is the watch is confused as I am? Can anyone be trusted?). But, frankly, I think it is too late for me.

On Tuesday, I sent my son off to school with no idea if he was really supposed to go to school that day. We are in a hybrid, 4-day, full-day, twice on Wednesdays, cohort, remote, snow day, teacher mental health day schedule. It is very confusing and clearly my mental health is suffering.

Good news: I picked him up at 3pm and it seemed like that was the right thing to do.

And now it was been snowing for 100th time this winter and I am not even sure anyone attended remote school, because I was busy dialing into meetings that were held yesterday or last week.

So tomorrow, which is Friday, I think--Friday, Friday, Friday--I will, well I don't know what I'll do exactly, because since my Monday list was for Tuesday, I am not sure how the math adds up being Friday and what that list would look like, would it be for Thursday? Or Saturday?

Is the weekend now shorter because last weekend was longer?

I'd close with TGIF, but I honestly don't know how we are supposed to feel about Friday, because when is Friday? So, I guess, to quote the great Lawrence Welk (who used to be broadcast on PBS every Saturday, whenever that is): Adios, au revoir, auf wiedersehen, Good night! (it is night now, right?)