Whenever it snows, I often see it mentioned that there are two types of people: those who shovel the snow as it falls and those who wait for the snow to stop falling to clear their sidewalks. Each camp has its own reasons--it is easier to lift small amounts or maybe it is more efficient to do the job once, instead of multiple times.

I do not fall into either camp.

I am the third type of person; I wait for the sun to melt it (and my husband to shovel the rest)*.

I hate doing difficult things until I absolutely must.

Sometimes, it is efficient, I mean in theory if the sun is going to come out and melt the snow anyway, why bother with the shoveling? It is energy that could be used to do something else entirely--maybe a Peloton ride or a nap or like anything other than shovel. 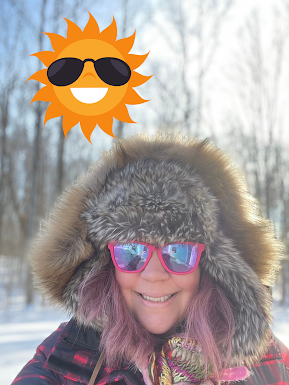 Lucky for me, my husband, my children and the sun all showed up today. So I did not have to shovel!

Which did leave me some time to review my January 2021** progress towards my goals. So here's where I am:

1. Fitness Goals: While I there was that day I "fitness" 500 soft pretzel bites in my month, I've been compliant*** with my daily abs and mediation, I finished my 400th Peloton ride and I did walk my Mom into cataract surgery. I did not run anywhere outside. Because it is January and we don't live in Hawaii.

2. Goodreads Goals: I read 5 books in January--3 psychological thrillers****, one historical fiction (which was disturbing in its similarity to now) and then one family drama called "The Vacationers" about people who go on vacation to Spain and have so many dumb problems that I wanted to scream: "IT SHOULD BE ME IN SPAIN NOT YOU! WEAR A MASK!"*****

3. Writing Goals: I wrote here everyday, even when I was in the midst of having personal mental breakdowns that I felt compelled to share even though I find that horrifying.  I did not stop writing mid stream to reimagine and edit anything, which definitely resulted in what a writer friend called "extensive footnotes" (I think this was a compliment.).

I did not pitch any editorial work, although I did start brainstorming some ideas to pitch. I did not build a desk (although I have an appointment at Philadelphia Salvage on Saturday to find myself an old door and some metal scraps to transform into a desk, so know in February I will still not have a desk as a result of my big plan.). I did not spend any time on my book. I mean, I did think a lot about it. But I mostly waited for something magical to happen and my book to write itself.

Note: this is not a thing. Except maybe in a Harry Potter book.

4. My Goal Goal: You may recall in "The First Blog of 2021," I set a goal of setting intentions for every week. I did this through the first several weeks of the year, but yesterday I had my total grief collapse and I am still recovering. My Goal Goal for February is to think more about my word of the year (Pause), more about my "Year of No" and more about setting intentions that have less to-dos and more time with my husband and kids. I think he misses me sometimes when my head is in my laptop or in a book. I am very witty and my hair is very pretty to look at.

Well, I off to rest up, in case the Sun does not come out tomorrow and melt the snow off my mother's car. She's got a cataract follow-up appointment and needs to leave 3 hours before her appointment, just to prove a point that you should shovel as soon as the snow falls.

*I am not good in floods--or frozen floods, otherwise known as snow storms.

**And halfway organize my pantry. And scroll on Facebook. And send around some Bernie memes.

**** I love a story about an unhinged woman murdering people. There is nothing better, except an unhinged man, also divine.

*****Related to my Goodreads Goal, is my book club, which has not yet had its first meeting. I think I've already been kicked out. We selected a book on Halloween, while drinking on my porch (and seated 6 feet apart with appropriate air flow.) It is almost Valentine's Day! I'll let you know if I still have my membership card.