Five years ago, I went to a foot and ankle specialist to get some insight on my ankle, which at time, was always aching.

At that appointment, the doctor told me I had high blood pressure and was missing a tendon in my ankle.

It was not a good day. I had a complete mental break over the high blood pressure (I had preeclampsia twice in pregnancy and I am forever emotionally traumatized by blood pressures that reached 250/100). I literally drove myself to Urgent Care, hysterical and sobbing, thinking a stroke was coming. Which is ridiculous given that 50-percent of the adult population has high blood pressure.* They mostly thought I was mentally ill. But, in the end, I was medicated and I am fine and the blood pressure thing is a story for another blog.

Anyway, I never went back to the doctor about my ankle. Instead, I self treated it--trying to strengthen it with exercise--and mostly twisting it once a quarter and ending up here: 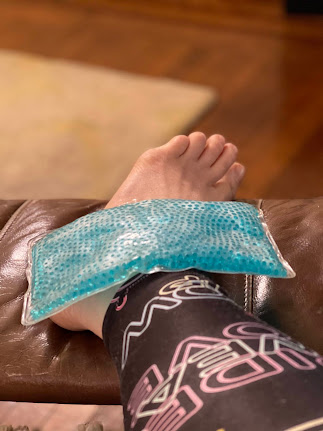 It is really stupid, actually. But I don't feel like dealing with it. Even though it hurts. Even though it gives out without warning and sometimes causes me to fall. Even though, I remember each and every time I twist it (pumpkin patch, class trip, brother's funeral, bus stop, snow pile, etc) and the impending drama/screaming.*** Even though I know I should, I just don't want to.

Instead, I'll just live with my bad ankle, until it like falls off or something, forcing me to cope with it, but even then, I'd rather just drag my busted ankle along and get on with my life, no matter how poor the quality of a life with a dead ankle is.

Which of course, leads me to the most profound thought:

I have more than just a "bad ankle," I have lots of busted things with missing parts that I hang on to for no logical reason, like:

And 4,000 other bad habits that I just cannot list now because it is Friday and I really don't want to feel like a total hoarder of "bad ankles" and really just want to feel pretty, relaxed and at peace with my busted ankle.

So, as I go through this year of pause and this year of no and this year of doing meditation and abs everyday, I think I need to also stop hanging onto all the busted things that weigh me down. Like pretending to writing down what I eat everyday,.**I need to do an inventory of the clutter and broken things and give that stuff away. I need to pause, say no, meditate it away and use my new strong abs to throw it all in the dumpster (because no one needs my trash).

But first, I probably need to get my ankle looked at. So who's got a good doctor?

*I learned this fact at Urgent Care and I told them they were liars and demanded proof, which they gave me, obviously.

**By the way, I am totally behind in this and NOT compliant. Yesterday, I wrote down: "Farro and other food plus wine"

***I have a high pain threshold BUT I am also very dramatic.