Tonight, I was going to write something funny about the word "Cleave" which Mike and I recently discovered via the Netflix series Firefly Lane.* 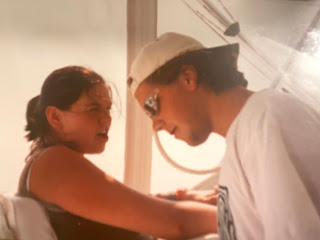 Anyway, I started and stopped writing about what cleave means 7 times and kept getting distracted by my adorable husband who is in the kitchen listening to old time love songs (like Goin' to the Chapel) and singing along while making risotto.

So, you all can Google "cleave" because I have a goofy, sweet man cooking me dinner while singing.

But, before I go, here is my #ValentinesDayChallenge that has been circling Facebook:

(Note: why do they call this challenge? and who is they? Who started this unchallenging challenge? I want to know!)

How’d you guys meet? Albuquerque, New Mexico on the band trip. (Note: I did not play an instrument and I am fundamentally opposed to group activities especially when they involve people who can follow rules and march in place to the beat of music. For some reason, my Dad conned me into joining and being in color guard. In the end, band was where I met my husband and my best friend, so the sacrifice of my personal morals was totally worth it. ) 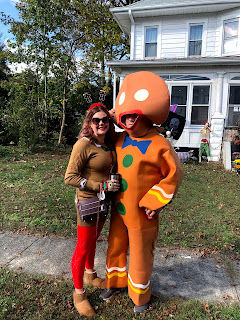 First Date: After Mike stalked me throughout New Mexico, we returned home to Bucks County. Our first date was at his parents house and we watched The Good Son, which was a very disturbing movie.

How long have you been together? Since forever! 26 years!

Married? One is traditionally married to ones husband. Also, I cannot keep track of our wedding anniversary. So Mike will have to fill out this survey so you can connect the dots.

Age difference: I used to be one year older than Mike. But now magically he is 2 years older than me. That is pandemic math! It's new!

Who is older? This question appears redundant. But I assume the mystery interviewer wants to know who is more mature. And that is obviously NOT me.

Who was interested first? Since he stalked me before New Mexico and then followed me around wearing mismatched socks to "impress me" and appears, at least as a sliver of a person, in every single photo from that trip, I'd say he gets the crown as pursuer.

Who is taller? He is. I don't even understand why this is an important part of our story. I am starting to feel like our privacy is being threatened? Is someone going to try to clone one of us? 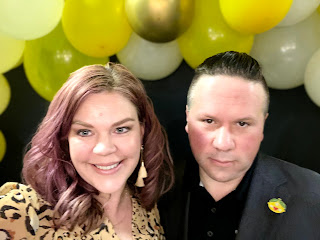 Who said I love you first? Me. Which is uncharacteristic of me. I usually say "I hate you,"  or "You are dead to me first," but he was a cute boy. I had no chance!

Most sensitive? He is; the singing along to the 1960s love songs, obsession with cleaving to me and the requirement of having to have two points of contact with me at nearly all times should be a clue. He also cries. And has held me when I've cried more times than I can count.

Loudest?  Right now, I think his music is the loudest. But, he is always telling me to quiet down because he is working and talking to 20 people and why am I scream talking.

Most stubborn? Me. While I accuse him of lacking flexibility, the reality is, I am so stubborn and cannot have my mind changed, ever. He is just rational. 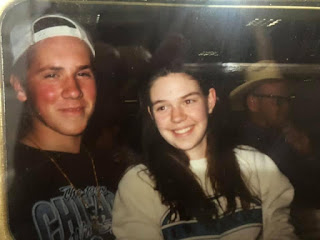 Falls asleep first? He does. Although, today I napped first. And he napped second; so I am not sure. Maybe we are changing?

Cooks better? I cook more; but I think we are both pretty fabulous cooks.

Better morning person? Me! Although I consider morning to be 2pm.

Better driver? Like in a race? Why is this question here?

Most competitive? Definitely me, although he does enable me. When Lily was in the NICU, I began competing with other mothers for who could pump the most milk. The other mothers had no idea this competition was happening. If they had known, they would have been disgusted and I could have become Facebook famous. But there was no Facebook. Anyway, I won. And Mike still owes me my medal!

Who is the funniest? There are several people who may believe my husband to be very funny, but that is because he steals my material. 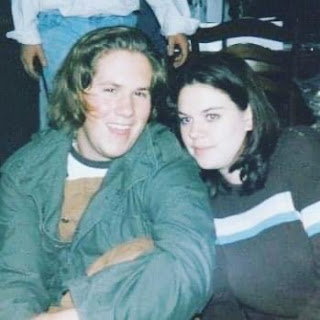 Where do you eat out most as a couple? Zeppoli!

Who is the neat freak? I feel this question is very judgmental.

Where was your first kiss? Junior Prom on the dance floor. It caused quite a scandal and for weeks I had to endure my entire junior class discussing our "kissing" in chemistry class. Then I had to have a weird talk with my chemistry teacher who wanted to make sure the "kissing" was consensual. I am making a revolted face while eye rolling as I talk about this. Adults are, like, so annoying.

Anyway, it was legendary. Some of you might remember it. #PromFamous

Plans date nights?  I guess we both do. 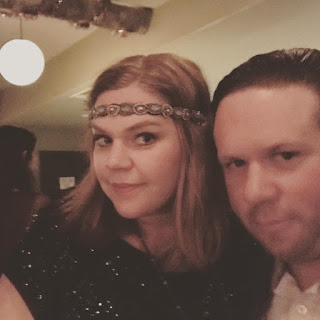 Who picks where you go to dinner? He does because I force him to and I complain until he picks the place I want to go, which is always Zeppoli or the Pour House.

Who is the first one to admit when they are wrong? Well, I always like to be first! I admit my minor wrongs as a ploy to hide my major wrongs.

Who has more tattoos? Me. He's got none.

Who sings better? Have you been paying attention? Mike does! He is singing the "Do Run Run Run" or whatever right now.

Spends the most? Me!!! I love spending money. It's my hobby! Mike's hobby is watching me!

Did you go to the same school? Yes! I would not bring an out of towner to the prom and draw more attention upon myself!

Where is the furthest you two have traveled together? Rome, for our honeymoon.

Who drives when you are together? He does! It's impossible to read a book and drive!

He's now switched to One Direction, which is my jam, so I am off to the kitchen sing along.

*Writing that we've discovered words watching Netflix has to be some new pandemic academic low.
Posted by Trish Adkins at 5:31 PM