A Viewer's Guide to Bridgerton (Day 34) 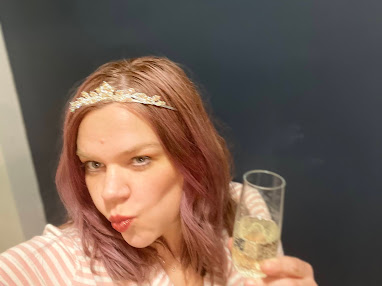 We've watched everything from Tiger King to Cobra Kia and finally gave in and started Bridgerton on Sunday.

I was instantly hooked! I loved the tones of Jane Austen, mixed with some edge and fantasy. The characters are all highly likable, the problems are very dramatic (and unfamiliar!) and no one has the plague!*

However, I do think programs like Bridgerton do require a viewer's guide. The Bridgerton family is not the Bennett Family and the Duke is not Mr. Darcy. And I do want everyone to be prepared for their maximum viewer pleasure and comfort!

Here are the top ten things you need to know before you watch Bridgerton on Netflix:

WARNING ADULT CONTENT AHEAD! (I've always wanted to write that!)

1. You need to have a family member's Netflix login.

At this point in the pandemic if you don't have Netflix, you are probably in a mental institution/jail/stranded on an island. But in the unlikely event you are not a Netflix subscriber, because you were comatose or gave up TV or are attempting to live like it is the Regency Era, don't be a sucker and subscribe yourself like I did! Just demand your loved ones hand over their log in credentials (which probably are not theirs in the first place).

2. DO NOT WATCH THIS WITH YOUR CHILDREN (OR PARENTS).

I think it goes without saying that Bridgerton is not rated for children. But, I have to note that you absolutely cannot watch this with your adult children. Whether they are 25 or 52 or 72, this is not a program to watch with anyone who once came out of your body or was adopted by you. You certainly cannot watch it with your PARENTS either or your in-laws!  It is a two-way street and remember WE ARE SOCIALLY DISTANCING!  Bridgerton is best enjoyed with your spouse, alone or with a trusted friend. I'll explain more next.  JUST TRUST ME.

3. Have two blankets ready.
The first blanket is because it is February and you will be cold. The second blanket is because around episode 5 or 6, Bridgerton takes a bit of a turn and that turn is that it becomes pornography. I am a married mother of three and I had to put a blanket over my head. Do not say I did not warn you. When it happens, you won't believe it. And no matter how "disgusted" or "aghast" you are, you will be sucked into the plot, so you will throw all your fancy, non-pornorgraphy manners out the window.  Also, make sure you can peak out from under your blanket. I mean you have to see when the "good" part ends.

4. This is a Regency Drama.

I have a friend who will not watch anything "old,"  or with "accents" except for reruns of Dawson's Creek**. Bridgerton takes place during the Regency Era, which means it takes place in the very very olden fancy days with fancy pants accents. The Revolutionary War is over and everyone is over the pesky, non-fancy colonists.  If you are not a fan of historical dramas, you won't like this. HOWEVER, the smut might be enough for you to overcome any "old" or "accent" phobias.***

You will instantly be sucked in. It might be the warnings of "adult themes"  that entice you at first; but the real hook is that you will fall in love with all the characters and NEED TO KNOW WHAT HAPPENS AND HOW. You won't sleep. It will be 9pm and within moments 3 am. Bridgerton is like some sort of addiction--it is almost as if Netflix pumps out IV caffeine with each episode. Cancel all early morning meetings and tell your kids they have to log into Zoom on their own.

So, you will get hungry (or nauseous depending on your opinion on suckling pigs). I recommend preparing yourself a snack tower in advance of viewing. A blend of sweet, savory and satisfying**** will sustain you through the Bridgerton drama. And don't forget the wine, preferably served in French wine glasses!

7. You will feel underdressed and like a dump truck the entire time.

Firstly, the salty and sugar filled snacks may make you bloated. But, the real issue is that we are now pandemic people. We are not business casual people or church clothes people or brunch with a few friends people. We are people who wear day and night pajamas and matching sweatsuits. We are not Regency people. Regency people are dressed at all times (except sometimes, as discussed above). The men wear approximately 17 jackets, several ties, but apparently just one pair of pants. The women have their hair on point at all times, with corsets and scarfs and gowns made from drapery fabric and jewelry.

They are fancy, post-plague people without endless Zooms. They have time to layer up. My advice, wear your best night pajamas, grab a tiara, some lipstick and of course, champagne! You'll have your dance card filled in no time!

8. You will pick up Regency habits.

You won't begin preparing succulent pigs; but you may begin demanding your children address you as "Your Grace" and you may only drink your wine from French wine glasses that you now have to have from Crate and Barrel. You also might also wonder why you did not name your children in alphabetical order.

9. You may recall your own "birds and bees" talk you had with your parents.

Regency era young women literally know nothing about the birds and the bees. It was heart-warming though, when Mother Bridgerton explains it as "Remember the basset hounds? They had puppies and no one told them what to do." This is nearly exactly how my own mother taught me about sex. Which is why I have three children. . .

I downloaded the book, because I love historical fiction and I love Jane Austen and I am totally okay with a certain amount of frivolous smut and escape from the very serious world I occupy.***** Despite the Amazon book reviews (that were headlined, "Even ignoring the male rape scene it’s still not great"), I was really ready to give the series a whirl. HOWEVER, within minutes of downloading the book, the advertisements on my Kindle changed from James Patterson to titles like "Tempted by Love" and "We Did It on the Beach," and "SEX SEX SEX."  Now I have to keep my Kindle face down!

But, Season 2 of Bridgerton is not being released until the Spring and it's a long winter! So why settle for an elevated, critically acclaimed novel when you can have Bridgerton?

*You can never be sure anymore if a pandemic or plague will pop up!

**** A nutritionist gave me this advice tonight! She was not directly talking about Bridgerton, but I think this advice always applies!