It was my brother's birthday (and other dates). 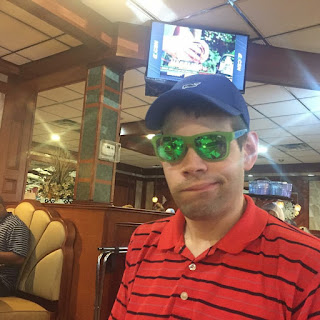 Today was my brother David’s birthday.

Now it is David’s unbirthday—the second birthday we are marking without him here to mark it. Tomorrow, we will set the countdown to the day he choked (September 15) and then his death day (September 23) and then on September 24, we’ll march towards his funeral day (October 2) and then finally on October 3, this will all be over for another year.

I hate remembering all these dates; but I cannot stop.  The numbers float in my head like bugs flitting against a porch light—pinging my consciousness and demanding to be let out.

September 15—screams— “Why didn’t you answer your phone the first time your mom called? Why weren’t you there at the ER to make them save him?”

September 23—begs—“You need to write to his organ recipients, they want to know whose eyes they are seeing the world through.”

It’s those dates that won’t simply go away.  It is those dates that have taken so much from me. They’ve taken my role as a sister (and it is okay, because it is true. I was a sister. I am not one anymore, even though I have the muscle memory for that job; death fired me from it).

Those dates have taken my belief that I won’t witness anymore horrors in my life (really, there are so many monsters under the bed waiting). They’ve taken my simple sleep and given me random, sneaky nightmares of my cell phone ringing in the early morning with a resident on the other end explaining that my brother crashed, again or telling me, now, now, now, get here.

Those dates have made it impossible to bury my brother’s remains—because once I set that date I will have one more date to remember and one more bug to fight. Those dates have enslaved me to a calendar—giving me freedom when they are done with me, only to come back again, loudly demanding my observance.

Next year, it will be July 9 again. And was my brother’s birthday.