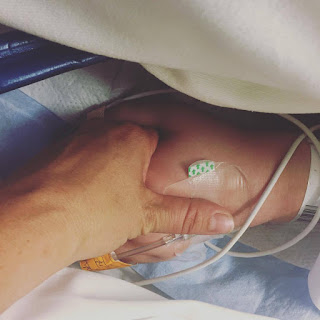 My brother was 37 years old. It was rounds in the neuro-ICU. I had endured four days of rounds and some conversations at 11pm on admission night. David had choked five days before I collapsed on the ICU floor, hearing sounds that seemed far way.

Those sounds were me. And I was screaming. David was not going to wake up.

The doctor was one whom I had peppered with demanding medical questions for days and stalked in the hallways and the elevator using every bit of medical knowledge I gleaned from other real-life medical dramas and the medical journals I kept reading on my iPhone. I had boldly demanded to know how organ donation would work should it come to that. I had remained professional—a professional patient advocate—because that is my wheelhouse. I trained through two stints through the other NICU (neonatology) with with two premature infant daughters, one long round as a mother of a child battling a brain tumor and endless work aiding my father at the end of his life.

I knew how to navigate the hospital system. I knew who to ask and when. I knew all about rounds and which administrators to race to if something was not going as planned. I knew how to advocate and how to ask and how study to drug interactions and medical research.  I knew how to arrange for organ and tissue donation—even for full body medical research donation; not that I thought it would come to either of these options.

But, I knew. And I kept it even and professional and made it my job to be the professional hospital spokesperson for my family.

That’s how I ended up on the floor, screaming No and pointing at the doctors on rounds as if they were terrifying aberrations—angels of death there to claim my brother’s body and soul—the very evil I had fought so hard to keep away with my questions.

The explanations were logical—the signals in the nerves of David’s body were not making it to his brain. There was still brain activity; but none in the right places. He was not brain dead. He was simply never going to wake up. We’d need to enact our organ donation plan. We’d need to make those decisions and move quickly because other things were also beginning to fall apart. The final thing I remember the doctor saying: “Maybe this weekend you can plan to have everyone say goodbye.”

A social gathering to plan, apparently. And that was it for me. I was on the floor.

Jennifer*, the nurse in the Jefferson NICU was the one to pick me up. She scooped me right up, took my cell phone and called my husband. She explained what happened. Then let me explain too.

Then she sat with me until Mike arrived. She never hesitated. She never asked my permission to provide comfort. She did what she had to do, because without it, I’d still be on that floor.

Jennifer was not a new nurse to my brother. A day or so earlier, she was there asking what music he liked and getting a speaker in to play Sinatra. They were trying to warm David up-to get him to wake up and join us. Jennifer said she often played music for patients.

She asked us about David’s life—what else he liked, where he lived, what he did. At first, it struck me as odd—I am not used to people asking me anything about David the man. David was severely developmentally disabled. He was non-verbal. He lived in a group home. Most people never looked at David as a person with interests—the default questions was about his general well-being. Rarely did someone say, “Hey, does David like sports?” “What’s David’s profession?” “What’s he doing with his life?”

Jennifer knew all the things that were in his chart; but wanted to know more. She wanted to know what music he liked and what TV shows he watched and if he had a good sense of humor and who his friends were.

No one ever asked if David had friends.

***
Two days after I was on the floor, Jennifer was back in the NICU as David’s nurse. We had been there since the pre-dawn hours—getting the call at 2 am that David was not stable and suddenly he had a fever that would not cease. At 7 am, in walked Jennifer. We had emergency rounds—the doctor on call dialed in using a robot (which is surreal) and then appeared in person an hour later.

David was actively dying. His fever was skyrocketing—even as they packed his body with cooling blankets—it kept going up. Gift of Life arrived—the arrangements were made. We had an operating room time, 30 vials of blood to collect, eye drops to preserve his eyes for donation and so much to do.

Our nurse brought me a basin to give my brother a bath. I was to clean and prepare him for death.  I know this sounds so incredibly horrible; but she allowed me to serve as David’s big sister one final time. I treasure those moments of being able to care for David—to touch his face and to see him again.

All the while, she managed dosing, hung IV bags, continued to try to cool David and keep him alive. He needed to live long enough for the operating room. We needed to make his broken body a gift to others. Our nurse knew this—she knew how much we needed to have a piece of my brother live on.

She pulled all those vials of blood, while watching his monitor—every single draw lead to a physical reaction in David. He was so unstable. Jennifer kept pushing forward—just one more and then another—until they had what they needed to make matches.

Then we had to leave to scrub up—waiting to see if we would see David and say goodbye one last time in a sterile operating room, with 10 various medical personnel who were ready to take what he no longer needed.

It is not a normal way to watch someone die.

And then she left. She went right back upstairs to find the songs that would give another sister comfort and to pick someone else off the floor, all while managing doses and vitals and medical questions.

Jennifer was our nurse. There is not a day that goes by that I don’t think of what a gift it was to able to wash my brother’s face and then send him off to Sinatra as a hero and organ donor.


Those gifts are only mine, because of our nurse, Jennifer.