When I was 8 years old, I woke up one Saturday morning and declared that I would marry my brother. I decided that I would take full responsibility for being his family when we were grown up.

Because I was his big sister.

I was too little to understand that marrying your brother was not typical or normal or advisable. But I was old enough to understand that my brother was far from typical. I spent nights lying on the floor of the upstairs hallway with my ear pressed to the vent listening to my parents discuss David and David's future and David's disability. Before I knew my ABCs, I knew that David might not ever be able to tell anyone his name.  I knew that David had challenges and differences far beyond anything my parents had planned for their youngest child.

I knew that David would need me. 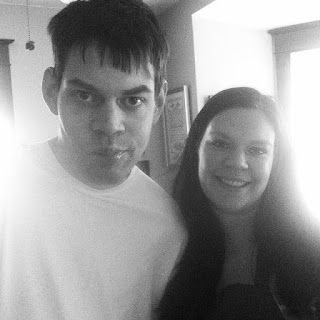 Then some kids asked me what was wrong with David. Why was he like that? What was he doing?

I knew then that the world might not love my brother. So, I had to love him enough for the world.

David is now 35.  I am fairly certain I've failed miserably at loving him enough for the universe. I am far from the devoted sister who races to his side every moment. I am far from the sister who picks him up once a week to take him to movies or to a concert. I am not entangled and close-knit and attached to my extended family in a way that has me involved in the daily bits of his life.  Some of this is my personality and some of this is circumstantial--David cannot speak or read, making communication difficult.  I'd never invite my brother to live with us and I'd never consider becoming his full-time caregiver. These things are outside of my comfort zone and far from something I am capable or willing to handle.

As life companion for my brother, I've most certainly failed.

Despite my failures, David has a successful life of his own--a life that by my own ridiculous standards may seem simple and small, yet for David is complete.  He has a home away from our childhood home--a group home of his own with friends and roommates. He has a job. He has a social life. I forget about him in my daily life, which I guess is a normal thing for a sister to do sometimes. He is taken care of--my father made sure he would be--and I am able to get on with my own life, unencumbered and unattached.

It all goes well, except for the little voice in the back of head that reminds me of that vow I made when I was 8. It was a vow built on knowledge and fear--the knowledge that David would need help to make his way in this world and fear that no one would ever love him enough to care.

It is the voice that says: Outside of my tiny family does anyone really love and care about David? Would they miss him if he was gone? Would they mourn his absence for more than a moment?

It is the kind of love that leaves us with a hole in our lives when that person is gone or missing or out of commission. It is real life, true life affection, admiration and fondness. It is the missing kind of love--the kind most of us know our friends and spouses and family have for each of us.

David is 35. He is in the hospital fighting double pneumonia. I am scared for him--scared his disability will make his recovery long and painful. I scared he will never cough hard enough to clear his lungs. I scared he won't get better.

I am scared that no one misses him, the way his big sister does.