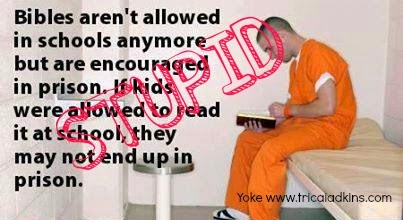 So, I think this picture is stupid.

I am sorry if you shared it and now you think I am calling you stupid. I don't think you are remotely stupid. I just think this image and the message is stupid.

If only the world's problems could be solved by dumping some Bibles into the local elementary school and reading a little Matthew, Mark, Luke and John. If only coloring pictures of Noah and his Ark would lower the rates of incarceration. If only, stupid, sensational quote-emblazzoned images truly held the key to turning our world into utopia.

The truth is, Bible or no Bible, people go to jail. Heck, Jesus died a criminal; as did most of his disciples.  Here are my seven reasons why I think this picture is stupid and needs to be deleted forever:

1. You are allowed to have the Bible in school. In fact, both my oldest girls have brought in the Bible or a religious book for silent reading time.  Your kid can read the Bible in school, if they choose. And if anyone ever stopped them, they would be in violation of their freedom of religion.

So, if you want to read a Bible at school, then, by all means, read it.

P.S. Your kid can pray too! My kid prays before every Math test.

2. If you want your Child's teacher to read and teach from the Bible in school, go to a private religious institution. If you think religion should be a government mandated part of education, then, well, hop in a time machine. Or perhaps try out one of the countries where religious peoples are murdered and forced to practice their beliefs in hiding, because the prevailing religion is not their own.

Oh, that is not appealing?

3. If you want your child to learn from the Bible, then read it to them. Read it yourself. Toss a few Bibles on your coffee table. Pop one in your car.  If you think more children in your community would benefit from Christ's teaching--then teach them. Show the world that being a Christian is about living the word, loving each other and forgiving each other.

I, for example, forgive the creators of the stupid image. I love them. Even though I think they might be stupid.

Notice a pattern? God loves us all the same.

5. Things that land you in jail:
Getting caught.
Lack of quality legal represenation
Lack of bail money
Not being white

Note: there is no scholarly research that suggests children who have Bibles in school are less likely to go to jail.  You know who is in jail: minorities. You know why: our justice system sucks.  You know why not: because of the Bible.

6. Jesus, well, he died a criminal. He completely offended the Roman government. And then they killed him.

Our Savior, sentenced to death, like a criminal with a Bible in jail.

7. His disciples, well, a few of them ended up in jail. Following a radical religious figure like Christ, leads you to jail. And Christ calls us to be revolutionaries. Christ wants us to challenge the world. So, challenge it. Don't simply throw a book at it. 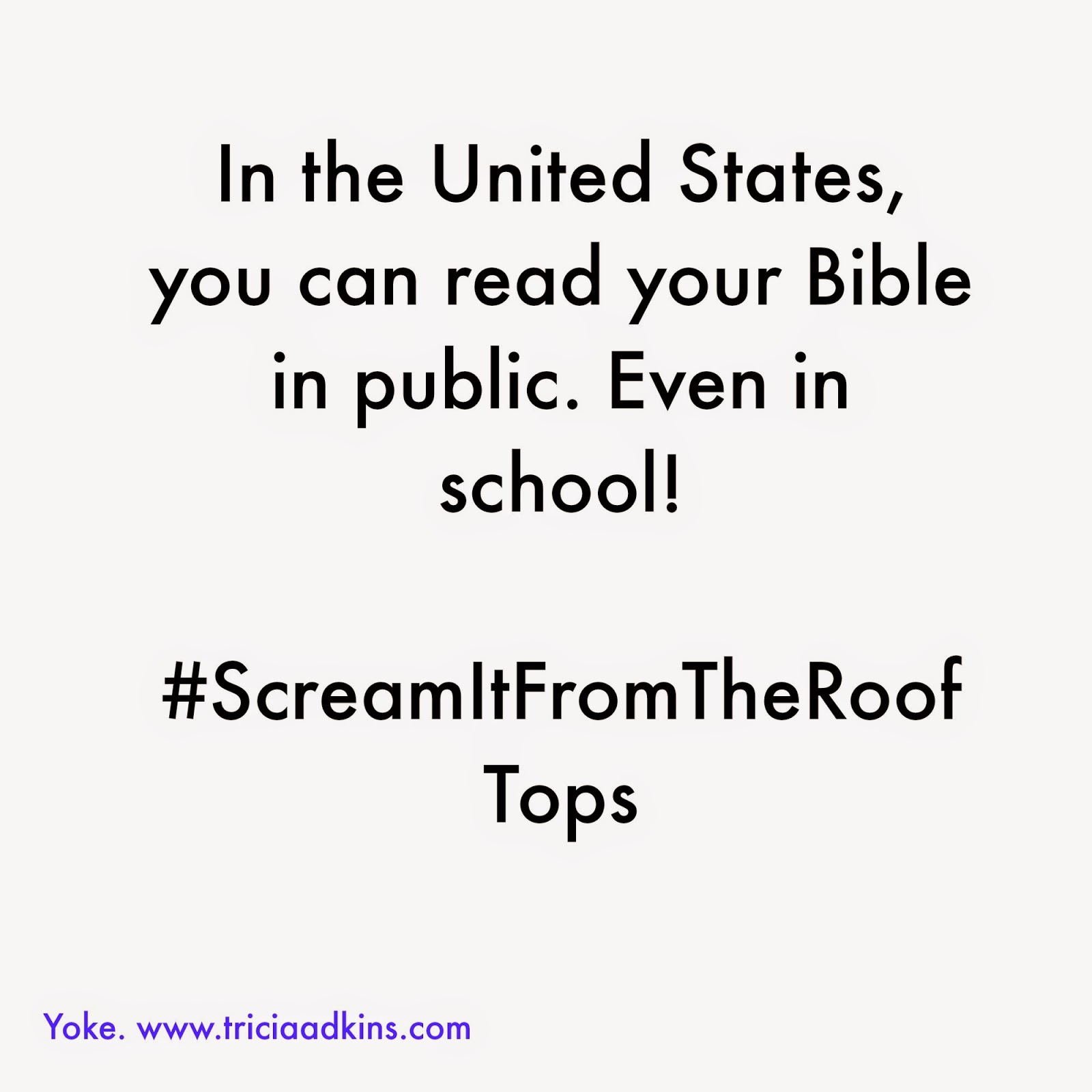