5 Reasons Why We Should Never Ever Make Up Snow Days or Why the School Year Must End. NOW. 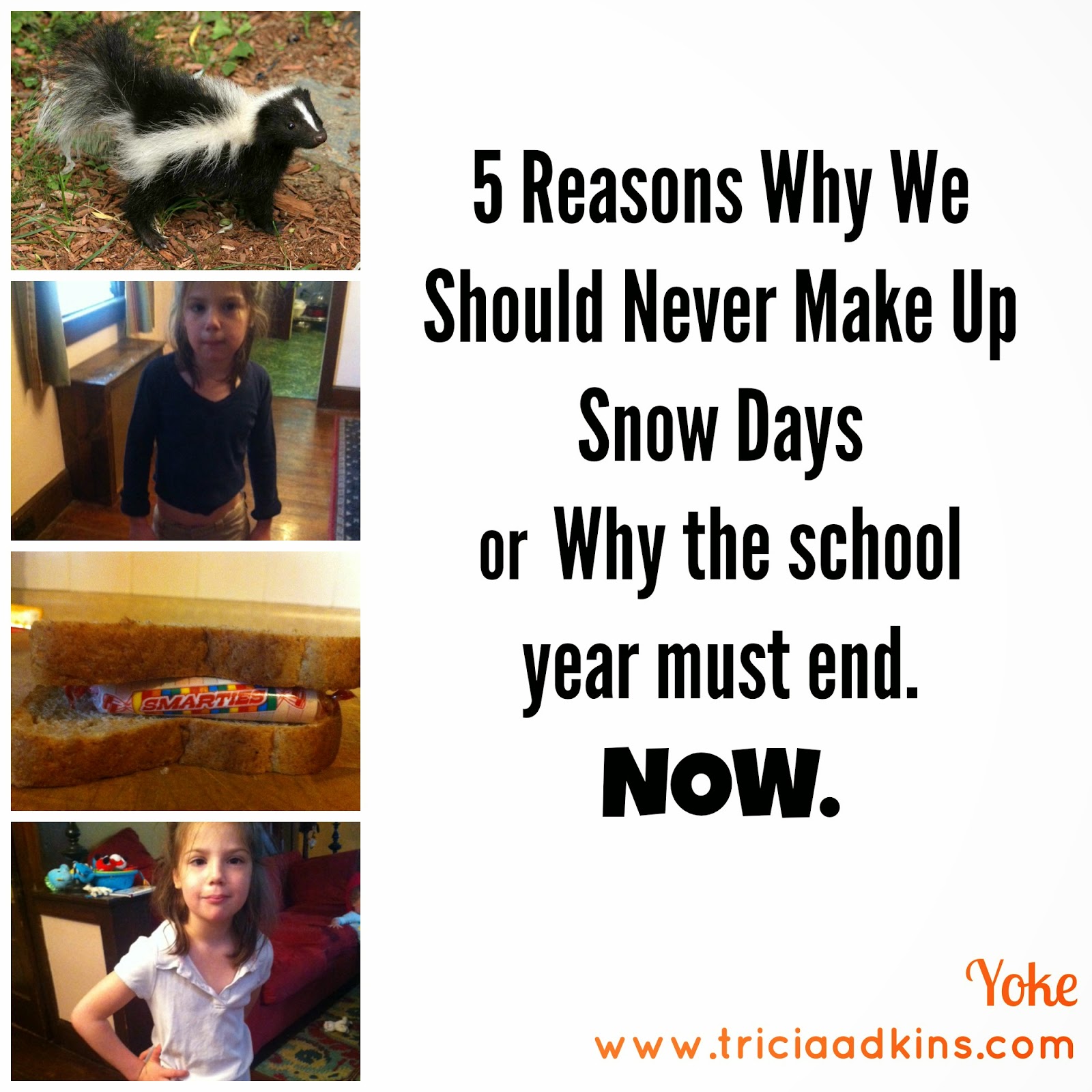 The school year needs to end.

What has passed, has passed and this adding on and extending the life of the school year is inhumane.

I am DONE. The kids are done. The minivan express to School 5 is DONE.  Do you know I don't even really look in my 2nd grader's folder anymore? She could be suspended, failing something or need to wear a special pirate-themed outfit every Tuesday until July for "Pirate Spirit Day." I have no idea. And I frankly, don't care.


1. Today, I woke up to a skunk near the driveway. I cannot leave the home, clearly, yet the 2nd grader is FREAKING OUT she will be late and need a late pass and get in trouble. When I calmly explained that maybe Animal Control can write her a note, she continued to freak out.

So, I guess the smell of skunk will be her late pass. 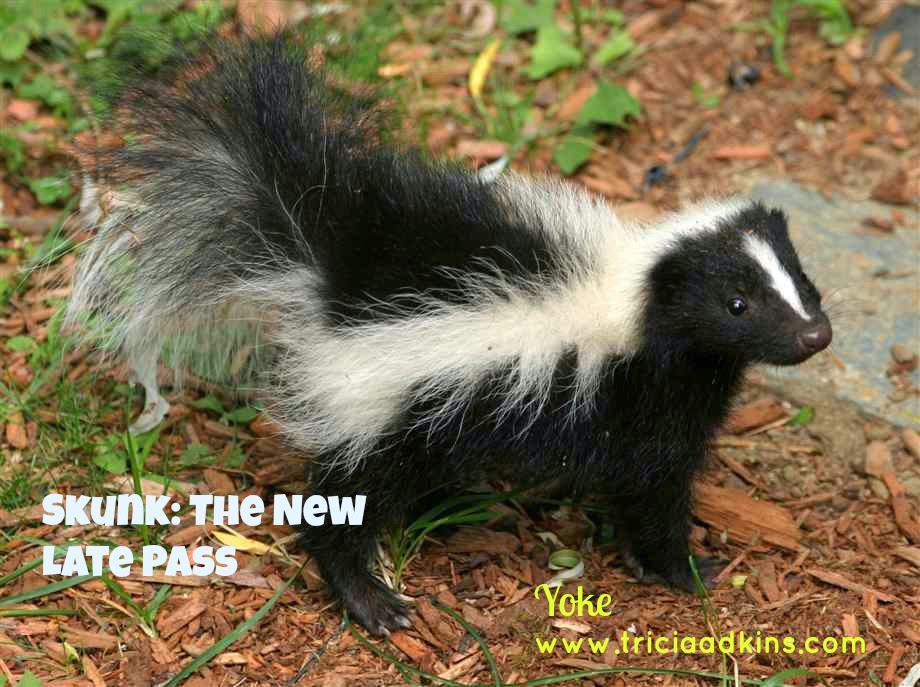 2.  I am sick of packing school lunches and my daughter has gone on a school lunch hunger strike. (A month ago, I would have sent in a giant bag of gummy bears instead of allowing her to buy "Mega Nachos with a Side of Steamed Green Vegetables and a nice Dose of Saturated Fat."  Now, despite my best PR efforts, she refuses to indulge in cheeseburger whole wheat spaghetti nachos topped with low sugar Cheez Whiz served by the school cafeteria.  I can't handle making one more soy-nut-butter and honey sandwich. The knife is simply too heavy and the honey bear squeeze bottle is clogged.

Today, I let her back her own lunch. Which consisted of: 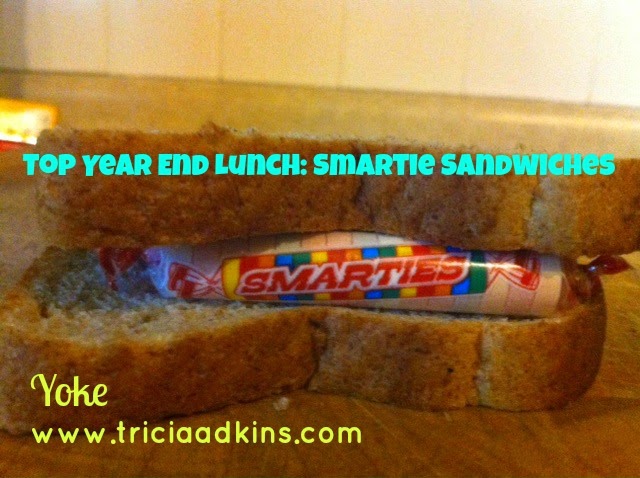 3. School pick up is dangerous. Going to the school everyday and being nearly knocked over by 500 excited, insane and caged up children as I attempt to steer two of my three towards the dismissal door for the third is exhausting, dangerous and nearly impossible to navigate in my flip flops. And then there was the death threat (long story) and the general misbehavior of everyone. SCHOOL NEEDS TO END, so the children can get on with playing in the streets, vandalizing things and whining about being bored. It is only natural.

4.   The only thing uniform about the school uniforms are the stains and the rips and the sweaters that expose belly buttons and elbows.  The school uniforms no longer fit, have holes, require ironing and are dotted with mystery stains. My children appear as if they have actually been at school for 180 days-straight, without changing their clothes. It is after Memorial Day and I refuse to iron or spot treat the stains. I need our wardrobes to be the kind you exclusively wash in the pool. It is bathing suit season; not polo-shirt-knee-length-skirt-season ( those skirts have not been knee length since March). 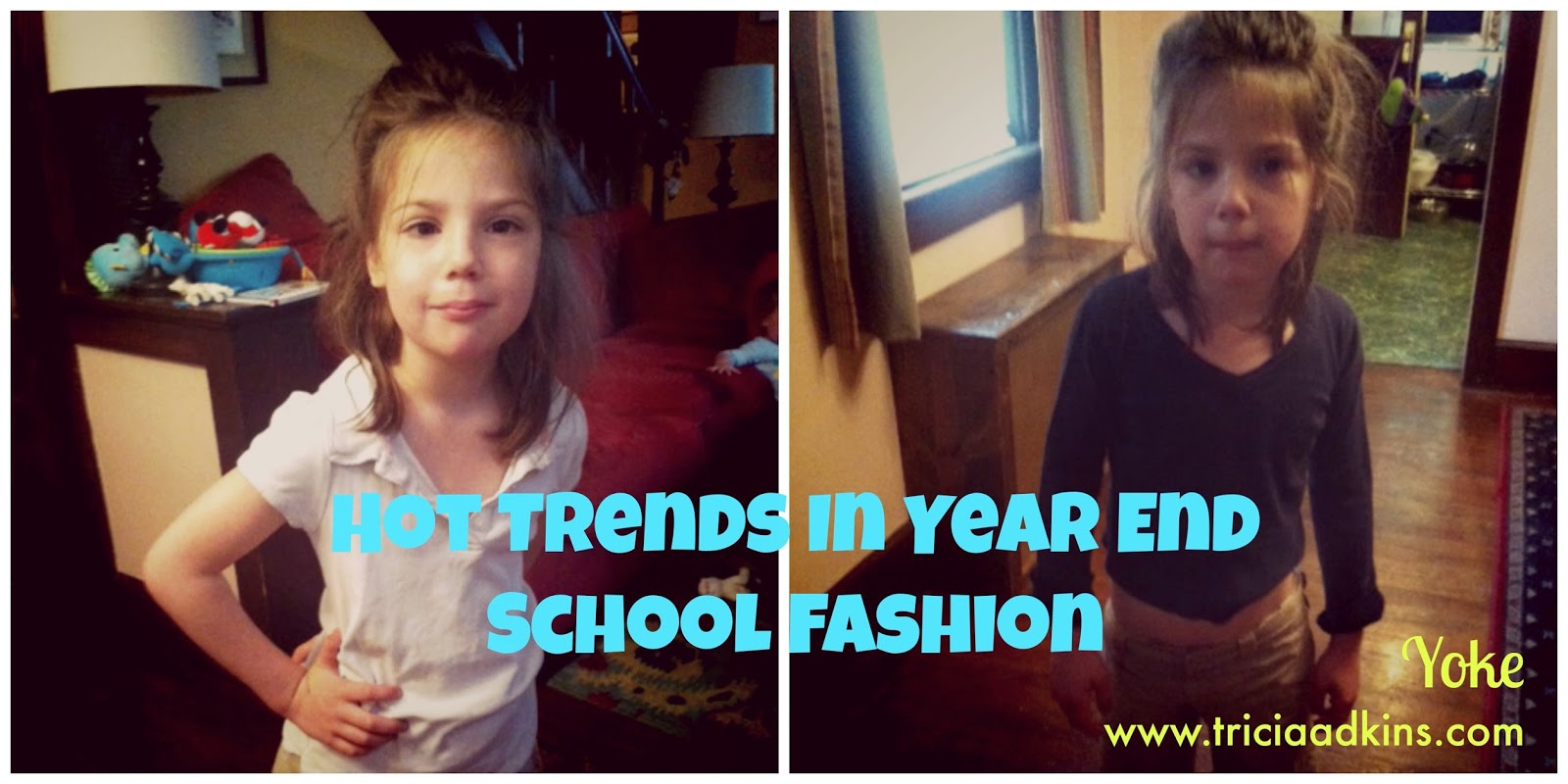 5.  The end of year hoopla is exhausting. One day, we will wear red to declare we have a heart; another day, we will dress as pirates; then we will need to find a vintage outfit from 1974 and learn a dance routine from Stayin' Alive. Look, I love a good costume. BUT I CAN'T FUNCTION ANYMORE. Can't everyday's theme be: "As long as your booty is covered you are winning!" OR perhaps we can just wear bathing suits. Or wear yellow, for Alex's Lemonade Stand (of course!)

I had a similar break down last year. Perhaps you, remember? Almost Forever: http://www.triciaadkins.com/2013/06/almost-forever.html