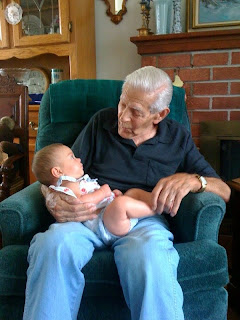 Chloe only remembers my Dad from pictures.

It breaks my heart; but at least she has that; pictures of him and her--together. And maybe in the deep refuges of her mind she will remember a feeling; a feeling she had when my Dad sang her to sleep or told her that she was something extraordinary and one of his beautiful girls.

Lily remembers him; my Dad, her Grandpop. I don't know what she remembers, exactly. It certainly isn't what I remember about him and her. But, it is something that belongs to Lily.

Nicholas has neither memories nor pictures. But, he has his Grandfather's ears and his eyes--and forever people will tell him that he has those big Carrington ears and that deep, serious, powerful William-esque glimmer in his eyes.

My father would not even recognize the family we've become--we were once four and now we are five.

He's been dead for two years.


I don't think grieving actually gets easier. I think it simply "gets." It gets buried in time and distractions and busyness and everything else that living piles on us. There are moments when it does not matter whether my father is dead or alive; and then there are moments when it matters more than anything in the world. Most of all, his absence is an in between sort of thing--a missing presence, a dull ache, an elephant in the room, a sad pause in an otherwise joyous time.


This grief; this loss is my own. There is no talking a way out of it--there is no advice on what to do--I've done it. I wake up each day. I put my shoes on. I love my children. I laugh. I work. I live. I do exactly what I did the day he died and the day after and after and after.

I grieve while I live. I live while I grieve. I get on with it, because life gets on. There is no choice--at least no reasonable choice--I am on the moving walkway. And grief, it gets.