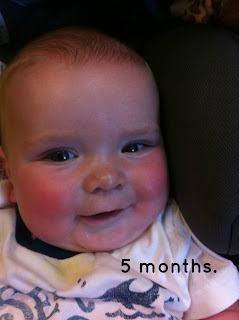 And I am in love.

I know, obviously, that I loved him the moment he was born and even before; but now, I am officially head over heels.

It was bound to happen. It happened with Lily. It happened with Chloe. But, with the boy, I thought it would happen differently. After all everyone told me how different boys were--and how they would be something totally opposite of my girls.

And while there are differences; this deep love affair that I find myself so deeply distracted by is familiar.

It's happened twice before. These Carrington-Adkins children get me every time.

Nicholas (or Nick or Nicky or Nick-Nack or Nicholas Hunter) is a spectacular child. He is quick to smile. He wants to laugh; but you have to work for it (unless you are one of his sisters or Henry, the enormous dog). He is a talker; destined to talk as much as Lily and Chloe and his mother. His eyes twinkle.

And Nicholas is absolutely, completely my son.

This month, he has begun requiring toys and in the absence of toys, Nicholas is happy to turn one of his sisters into a toy--reaching forward with both arms in a posture reminiscent of a zombie; grabbing onto hair or clothes and giggling until he farts.

My son is absolutely an Adkins boy.

There are moments, when it is just him and I, and I am ranting aloud about something political or societal or insane (because I often rant to myself) and when I finally pause, Nicholas looks at me and coos.

My son enjoys my voice.

And I enjoy his--I am beginning to know his voice--and while I cannot quite put it into words, Nicholas has a voice all his own. His voice is not Lily's nor is it Chloe's and it certainly is not mine or Mike's. Nicholas, like each of us, is his own little man. And while I cannot predict his exact first words, I know I will recognize those first utterances.

Because Nicholas is my son and my love. He is one of three; yet the only one quite like himself. He is simply Nicholas.

Email ThisBlogThis!Share to TwitterShare to FacebookShare to Pinterest
Labels: Nicholas