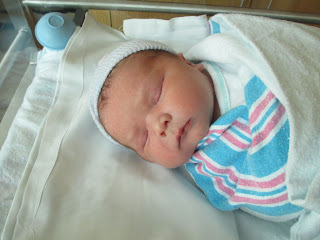 I noticed his ears when I first laid eyes on him at 3:02 pm on December 11. His ears were hard to miss--the same size as his four-year-old sister; Nicholas' ears stuck out from his head. It is like they will be listening to everything; not missing a thing; keeping the beat and always knowing the song.

My old man was right there with us--greeting his first grandson and third grandchild--in spirit. He was there running through my thoughts and watching over us.

We named Nicholas for my Dad. Nicholas is the patron saint of sailors (and children). My father was a sailor, a Merchant Marine in World War II. St. Nicholas is said to have guided sailors home; protected them and secured their lives. As a little girl, I loved my father's stories of sailing around the world to England and Morocco and through the Panama canal and to Spain and Curcao. As a college student, I hung on every word as he told me the dark stories of floating in southern Atlantic Ocean, all night long after his ship was torpedoed. 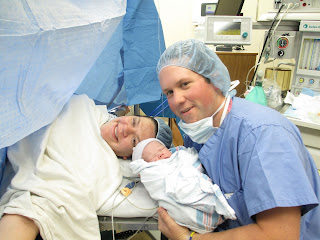 Nicholas is a slice of perfection. His thick black hair. His dark gray baby eyes. His long skinny feet.  His gorgeous cheeks--the same cheeks Mike had as a baby.

Nicholas is the baby I never thought I would have; but the child I've loved my whole life. He has completed us in a way I never thought possible; opened a door I thought was closed. As I gaze at him, I know exactly where he came from. It is written all over his face and his ears.

Email ThisBlogThis!Share to TwitterShare to FacebookShare to Pinterest
Labels: Nicholas, Party of Five