Doctors often call ependymoma rare; but when something happens to you, it is no longer rare. Ependymoma  is the third most common type of brain tumor in children. While long term outcomes have improved in recent years, ependymoma can come back even years and years after initial diagnosis. Treatments often have permanent side effects--even side effects that can cause secondary cancer.

Please read Caroline's story, as written by her mother Leslie and share. Awareness will increase research funding and someday, we will have a cure.

My daughter, Caroline, was diagnosed with ependymoma, a so-called rare brain tumor, six and a half years ago.  Before December 30, 2005,  I had never heard of Ependymoma nor did I personally know any child that had ever had a brain tumor.  Caroline was a normal baby and child. Around age 4, she started throwing up in the middle of the night or early morning with no apparent cause.  It took us almost a year and lots of persistence on our part to finally convince doctors that something more than anxiety or acid reflux was going on.  A CT scan finally brought us the devastating news we never thought we would hear:

Your child has a brain tumor.

We were told surgery was her best option, and that removing the entire tumor gave her the best chance of beating this thing. Caroline went through brain surgery at 5 1/2 and to remove the tennis ball size tumor in her head.  We were then told that there really wasn't any chemo that was very effective and that her best chance at keeping it from coming back was to subject her to radiation.  The thought of filling my growing 5 yr olds head with toxic radiation was nauseating, but what choice did we have? So she underwent 33 proton radiation treatments.  Surgery left her unable to speak or walk for 3 weeks and left her with double vision and misaligned eyes.  True to her fighting spirit, she recovered completely, and went 4 years living life as a normal kid.  We went for MRI's every 3 months where we held our breath, just praying she remained cancer free. 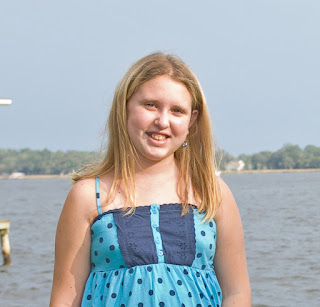 Almost exactly 4 yrs later, a scan showed it was back.  She was now almost 10, and she underwent a second surgery to once again remove another tumor.  Unfortunately, she suffered a small stroke during the surgery which left her completely unable to walk and with right sided weakness.  She spent 19 days in inpatient rehab and walked out of the hospital despite doctors telling us it wasn't possible.  She again made a near complete recovery.  Radiation wasn't an option and there were relatively no new promising medical options for her.  So we tried an oral chemotherapy drug in hopes it would keep her cancer free. She took it for one year. It was extremely expensive and the drug company offered no assistance to cover it as it wasn't approved for treating brain tumor children at the time. Through help from family and generous organizations like the Tom Coughlin Jay Fund and the Butterfly Fund we were able to cover it.

Fifteen months later, another spot was found during her routine MRI.  She had her third surgery and the tumor was once again removed.  With still no proven treatments and little options, we decided to do another round of radiation.  She has now had 2 lifetime max doses of radiation to her head and she is one year post surgery and radiation with clear scans.  The first round of radiation has left her with some mild memory and processing deficits that she is dealing with and overcoming.  Today she is a happy, healthy 12 year old and we are so very thankful for each and every thing she is able to do. 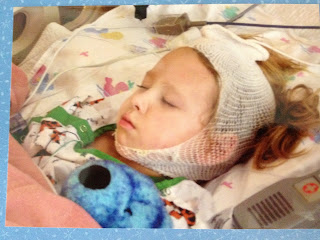 We live with the knowledge that not only could this disease come back at any time, but also that the treatments we chose could cause other cancers and problems. No parent should ever have to sit in a doctors office and be told that they just don't know what the right decision is in your child's care, that they don't know what works or why it works or doesn't. But that is just what a parent of an ependykid hears.  There are experts working day and night to help find a cure, but it's not coming fast enough for so many of these kids.

Real kids get cancer, not just kids on commercials.  I never thought it would be my child until it was my child.  Never has this cause been so important to me than now as I watch my daughter achieved milestones that could so easily be taken away. I don't want another parent to have to endure what we endure.  September is Childhood Cancer awareness month.  Please be aware that kids get cancer too and that they so desperately need us to speak up for them. We not only need a cure, but we need new and safe and effective treatments for these little warriors.