For the love of lacrosse: Friends of Jaclyn Foundation

It always funny to me that I attend so many sporting events. I am most definitely not a sporty girl--I don't have any idea of the rules nor do I keep up with the who's who of the Phillies or the Eagles or the Flyers. And despite my love of words, I have to ask Mike before I post anything remotely sports related on Facebook--I just don't want to say the wrong thing. 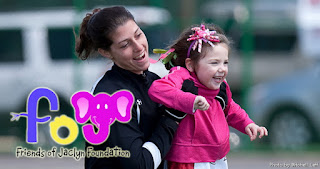 Perhaps that is why Lily's sisters and coaches on the Temple University Lacrosse Team have been so important to Lily's recovery and to our family. The young women on the team give Lily an example that I cannot provide. Each game, Lily watches those girls power through a game---and no matter what the score is (Lily never cares), Lily leaves a little stronger.


Because she just saw the team that she loves playing sports and fighting for their team. She watched her sisters use their bodies to run and score and pass and play with joy. Lily has seen what is physically possible. And for a little girl, who often feels trapped by shaky hands and unbalanced steps, this is like watching her own potential in action. Lacrosse games are Lily's crystal balls.


Lily was adopted in 2010 by the Temple women's team through the Friends of Jaclyn Foundation, an organization that matches children with brain tumors with a college team. The match for us felt natural: Mike and I are both Temple Alumni. We love our school. Mike loves sports. And I love strong women.


We went to the team's Friends of Jaclyn game just to check it out. Mike knew about the Foundation--and we knew the team had adopted another little girl, Devon Lam, who had an ependymoma (like Lily). Devon lost her life to a brain tumor. The team lost their sister. Devon's parents, Danny and Angela, wanted Temple to adopt again.  Lily has Devon as a sister too, albeit in heaven. I can feel Devon's strength and the strength of Danny and Angela at every game. 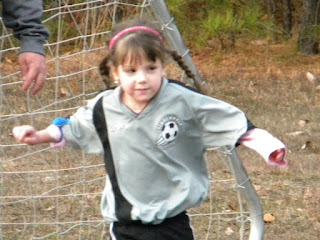 
I've seen Lily fall more times than I count, but I've also seen her stand back up and fight again. Just like her sisters at Temple. During the final game of Lily's Fall Soccer season, a bunch of "her lacrosse girls," came and cheered. 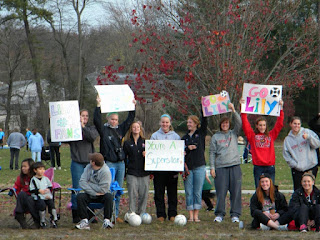 Earlier in her soccer season, Lily was timid--more of a follower than a leader. With her sisters cheering and waving signs and expecting the best of her, Lily fought through that game, getting her feet on the ball and being a leader, as well as a teammate on the field.


I've watched Lily grow from a struggling tiny preschooler who could not walk, to a powerful six-year old who can run down a soccer field.  I've watched Lily heal with the love and example of her sisters. We've healed too--knowing how much our family is not alone in our fight for Lily.


And for that: I love lacrosse. I know every players name. And I always will.

The Friends of Jaclyn Foundation works to improve the quality of life for children with pediatric brain tumors. The program is based on love, support and friendship between the child, the team, and the child’s family. We pair a child with a college or high school athletic team based on geographic proximity so the child can be involved with the team as much as possible. The child is “adopted” by the team and becomes an honorary team member. The gift is in the relationship. The child gains a new support network of loving friends and the team learns to see the world with new eyes.