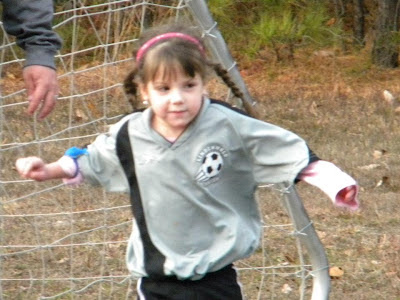 About two hours before Lily was born, the NICU doc sat at the foot of my hospital bed and told me that Lily, about to be born a 29-week preemie, would never, ever run a marathon, so I needed to lower my expectations.

My blood pressure monitor alarmed and I remember thinking, "Lily will run a marathon. And she will run it, while you watch from your lawn chair eating Cheetos."

Then, of course (you know the story), Lily was diagnosed with a brain tumor. One of the first questions I asked the neurosurgeon: "Will there be side effects? Will Lily be in a wheel chair?"

After all the million things that could and almost definitely would happen, he said: "Her frontal lobe will take over. It will take time. It won't be easy. But she will be fine."  One day later and Lily came out of brain surgery, a 14-month old who could no longer hold her head up, let alone sit on her own. She cried very time we lifted her out of bed. She wouldn't smile.

And, I thought, well, that stupid NICU doc was right, no marathons for Lily. Then a day later, Lily laughed. Mike made me bring in a yoga mat and the cloud lifted day by day, week by week and year by year.

Now Lily is pretty good at sitting. She is also pretty good at running. And she is a damn good equestrian. Lily aspires to paint beautiful pictures to put in galleries, while playing on a college lacrosse team. In the short term: she just wants to get strong enough to do a cart wheel and ice skate.

Lily also hates going to school on Gym class days. She hates it. She cries. She tells me "it's not fair." She says it is too hard.

It has baffled me--this hysteria from a girl who took a ballet and tap dance class when she could barely walk; the child who shows fear, but still pushes ahead, roller skating before she could run; the school girl who runs with the boys right after school everyday; the little girl who wants to learn everything and anything--who loves her body for its perfection (flaws and all). Lily, who is braver and stronger than everyone I've ever met.

At first, I ignored her--thinking maybe this is an excuse for not going to school. Then, I thought, well, her Gym teacher is sort of gruff--more of a yeller and than hugger--but truly loves the kids, after all she chose to be a teacher. And Lily should learn how to deal with difficult people.  Then, I thought, maybe Lily just does not want to wear her sneakers--maybe it is a fashion dilemma.

Then, finally, I asked Lily, in a calm moment--what's the deal?

And there it is: The NICU doctor is back--the outer voice that screams at you all the things you cannot do--that voice that reminds me of your shortcomings and demands that you fix them or feel like crap. This voice is now yelling at my 5-year-old.

I could get on a soapbox about my opinion on the role of physical education in schools (but that is for another day). For today, I am worried about my daughter--the little girl who some said could do nothing and others said would do it--the little girl with a tender heart who, because we had no other option, was raised to be a warrior. My beautiful child with more scars on her 5-year-old body, than I have on my 34-year old one.

Once a week, Lily walks into a gym class and is told what she can't do. Berated for not doing everything the same as others. She is reminded of her body's imperfections and told that makes her something less. She is graded on her inability to jump--as if this inability today--is something she will never be able to do. Lily has been introduced to the cold, mean world of naysayers--a place where you are defined by everything you can't do right now. She has encountered her very first grown-up bully.

I am so scared this woman will ruin it all for Lily--that her negative voice will take root in Lily's beautiful head--and someday Lily will be less than Lily wants to be--because she will believe that she is less. And that somehow, Lily will miss her marathon.
Posted by Trish Adkins at 11:33 AM