I promised myself I would never write about Penn State (or all those what's-their-names) because, really, what more can be said? But, alas, I am constantly breaking my promises.

This morning, as I walked Lily into school and down to her Kindergarten classroom I witnessed what could be classified as "sort-of-a-fight" with a side of "school-teachers-and-staff-ignoring-yelling-students -and-a-parent" in favor of "talking-about-nothing-remotely-related-to-the-fight-happening-right-before-their-averted-eyes." 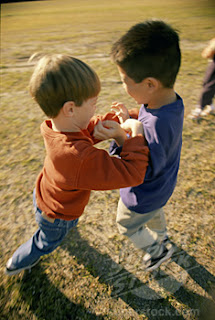 I walk Lily down to her Kindergarten classroom almost everyday.  As we got close to the Kindergarten hallway I hear two boys, arguing over the presence of the guidance counselor. It was a nine-year-old boy level debate.

Boy 1: He isn't here
Boy 2: Yes he is
Boy 1: No he isn't
Boy 2: Yes he is
Boy 1 was blocking the path to the counselor's office. Boy 2 wanted to get there. Pushing and debate continued.  I would characterize the incident not as being a fight deserving of punishment, but an opportunity to teach these boys the appropriate way to argue (i.e. you don't push each other and why aren't you in your classrooms?).

Alas, I witnessed the fight and I am not one to be quiet about anything, ever.  I told the teachers standing outside of the teacher lounge, right next me. I said:

Me: "There are two boys fighting over Mr. X"
Teacher: "Oh, I don't think Mr. X is here"
Me: "Yeah, THERE ARE TWO BOYS PUSHING EACH OTHER."
Teacher: muttered something and continued speaking to other teacher
Me: "Do you allow children to fight in the hallway? They are pushing each other"

The teachers ignored the boys and me.  I am fuming. Lily told me to count to ten. (She is like a little blood pressure cuff.)

It was a Penn State Moment--the moment when bad behavior is right in front of your face. You see it; you hear it; you've been told about it and you have to decide what to do with it all.

I could have just walked around those boys. No one was in danger. But, I have a big mouth and if those were my children, I'd want their teachers to teach them how to behave. To remind them that they are better than pushing and yelling.

It was a Penn State moment for those teachers. I have no idea what they were talking about. I don't care. All that I care is about is that unless they suffer from a hearing impairment, they could hear those boys arguing. They could hear me say, "They are pushing each other." But, for whatever reason, they chose the easy, non-messy, non-confrontational way of living:


Do nothing. Pretend it is not happening. Avoid the mess.
I know that two boys pushing each other in an elementary school is no where near the same thing as a boy being sexually assaulted in a shower. But, the lesson is the same: adults need to listen. Adults need to take the messy route when it means doing the right thing. Little things become big things. We teach with our action and our inaction. And all children are our responsibility.


We are the grown-ups, for pete's sake.
And the other lesson: As a mother I need to teach my daughter to tell the truth over and over and over again. I need to teach my 35-pound peanut, that she needs to use her loudest voice and risk getting in trouble to tell an adult when something dangerous or improper is happening. She needs to stand her ground always when she knows the truth should be heard. That no matter how big or little or dangerous or minor the incident is:

Do something. Speak loud, until someone listens. Don't be afraid to get a little dirty. Because often, adults don't listen.
You should know, that as the fight rounded into the kindergarten hallway, one of the Kinder teachers spoke up--without my prompting and sent those boys back to class. The teachers, who ignored the incident? Well---one took away a "responsibility point" (whatever this is) after the fact (in response to my refusal to move from the spot until they addressed me or the situation).
So those boys will be fine. But what happens if the incident is bigger? What if a big mouthed lunatic like me is not there? What then?
Posted by Trish Adkins at 7:26 AM