Jesus and Those Blind People, Part 1 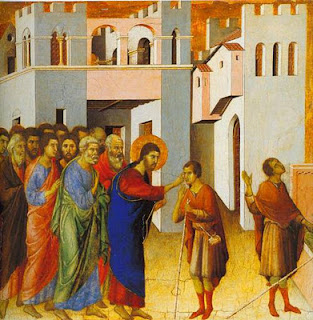 Jesus heals eight blind people in the Bible. Plus there are all those other lepers, heathens and other undesirables that He saves with His miracle, healing touch. The hand of God placed right on your decaying body and voila: you can see. you can walk. you are healed.

When I was a kid these stories always seemed completely bizarre to me--it reminded me of those exuberant televangelists that convinced my Grammy to send them all her money.  Jerry Falwell, Oral Roberts, Jimmy Swaggart and the Bakers booming on the TV, healing, saving and praying--if you emptied your old lady handbag into their hands. To me, Jesus healing people was old news--any real life healing was a lie. Jesus--He was dead, even though He was "alive" in heaven with God the Father. He was not here--He was not here for healing.

We were left on our own.

I believed, sort of.  Or so I thought.  I didn't really fully believe. After all, my mother and father prayed their hearts out--prayed until their knees bled for my brother to be healed. David was six months old when his world changed--an allergic reaction to a vaccine and voila: he can't talk. he won't ever live on his own. he won't ever be healed.

So, yeah, I thought Jesus and his healing was history.

Then I became a mother--in a dramatic, terrifying night--Lily born 11 weeks too early. She is sick. I am sick. And I have nothing. There was nothing for me to hang onto--but hope and prayer that we would be healed.

And we made it through. And yeah, Jesus did not swing into the NICU and say: "Rise up Sister you can breathe." But there were these incredible doctors who saved my baby's life. There was my doctor who saved us both with an emergency c-section. And yeah, my minister Bill Getman, swung into the NICU--putting on scrubs, washing his hands and prayed with us. He reminded us that Jesus is not dead. That Jesus is in his hands. Jesus is in the doctor's hands and Jesus is in my hands.

We totally thought we were home free. Then, 14 months later, a brain tumor for Lily. And I spent days on my knees. First, I cursed God out--I did. Then, I begged. Then, I bargained. Then, I had nothing, again.

When I was at the point of rock bottom, when I thought I was actually in Hell,  Pastor Bill walked in, closely followed by the CHOP hospital Chaplin. Both men just showed up. I had asked the nurse to get me pills--lots of good drugs that would make me forget I was in Hell. But God had other plans. He listened--he knew I needed something concrete.

And with Lily lying in her hospital bed, fighting to survive--we all prayed. And this time, I felt it: the hand of God placed right on my shoulder and voila:

I was saved. I was healed. I had the strength to make it through for Lily.

"Jesus and Those Blind People," is Part 1 in a series in Yoke on my Faith. I realized that while my heart believes and I try to remain faithful, I don't share my faith enough. And for me, a writer, that is akin to hiding in a closet. So, here it goes. I hope God is good with it all.
Posted by Trish Adkins at 3:06 PM