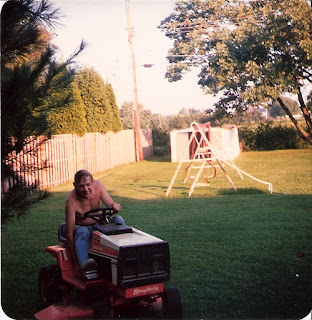 There were, the very day my father died, signs that maybe something was going on in my parents house--the house my Dad had built way back in 1950s. The switch to the hot water heater was switched off--randomly. Mike discovered it, when there was no hot water. Sitting right next to the water heater: my Dad's gloves and a screwdriver. He always left the proper tools with the item that might need fixing.

My Mom decided it was a sign.  A week later, someone reset the outlet used for the home phone. And then, some how the furnace was shut off. It could have all been flukes. Or maybe, like my Mom believes, these were signs that my Dad was still around--tinkering, communicating and checking in.

The week before his funeral, my cousin Sue went to the racetrack and bet on a horse named "Bill's Presence." My Dad was her Uncle Bill--and the horse won, against the odds. I have the $100 bill on my bookcase--I can't spend it.

But, all these signs--all these little glimmers seem to belong to someone else and not to me. My Dad never said, when I die you will see a rainbow or a bird. He never said I will be watching over you. He never said that he was going to go a better place. Those things--those things were not my Dad, who was always so hooked into the here and now. My Dad, my Dad was always present.

I've had one dream--just one--featuring my Dad. We were sitting in church. My Dad was sitting criss-cross applesauce, something he was last able to do in the 1970s. Next to me was my brother. My Dad spoke to the faceless minister, "I know I have to go, but I don't want to." Then he cried. We all cried. I haven't stopped.
And that was it. But where is he now? Where did he go? Where didn't he want to go? At least ten times a day, I say out loud, "Where the heck are you Dad?"
It is not that I don't believe in heaven or the life everlasting. I do. But where is this place?  If he is watching over me, as every sympathy card, friend and good hearted stranger tells me--where is he watching from exactly?
Sometimes I turn around in my desk chair and expect to see him.
But he isn't there.
Posted by Trish Adkins at 1:42 PM