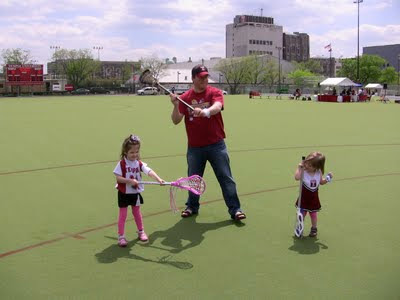 I don't know anything about fatherhood.

I imagine it to be a difficult proposition. You are at once the breadwinner and again an enlightened man, changing diapers and sewing ballet costumes. You still feel a need to provide for your family and while it does not matter who makes more money, it does, because you are the father. You are a husband, a best friend and still a son.  And while a mother can wear pink or blue, a father, well he cannot wear pink. And well, don't we all have some ghosts of the 1950s in our blood confusing us with black and white notions of gender roles?

Or maybe I have it all wrong, entirely.

Either way, I will never really be able to walk in my father's or my husband's fatherhood shoes.

For my dad, his fatherhood was incremental.   First, an older half-sister born in the late 1950s and then me in the 70s, followed by my brother in the 80s. Three very different (and albeit equally high maintenance) children. Three souls all yelling, "Daddy, daddy, " all at once, while my father worked two jobs and still made it home for dinner, every night.

For my husband, Mike, fatherhood has been a crash course in survival. First, the shocking and early birth of Lily, followed by the devastation of a brain tumor diagnosis, followed by the joy of survival, the fear of another preemie and then the joy at Chloe's survival. While this life-death drama played out, Mike was still the breadwinner, the enlightened man and the husband. He put on his work shoes in the morning and then scrubbed up for the NICU at night. He did it all, seamlessly.

I am occasionally jealous of Mike's ability to "escape" to the office everyday, to eat lunch with adults and then to come home and be off the office clock. Often, I forget, no matter where Mike is--whether the office or at a ball play or in our living room, he is always a father. There isn't an escape and he is not looking for one. Instead, he is working until it is time to come home and be with us.

I really don't know anything about fatherhood. But, I do know, that Mike is one of the great ones.
Posted by Trish Adkins at 5:15 PM