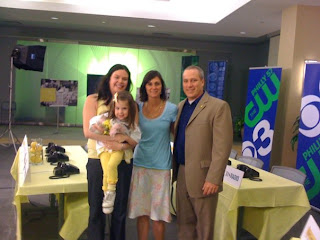 Yesterday, Mike and I got to spend some time with our heroes--Liz and Jay Scott, Alex's parents. It was awesome. Liz and Jay not only raised Alex Scott to be the inspiring force that she was, they parented Alex through cancer, lost Alex to cancer and everyday keep her spirit alive through Alex's Lemonade Stand Foundation.
I have one of Liz's business cards from Alex's Lemonade Stand Foundation. Her title on the card is: "Alex's Mom."
It is the most honest business card in the whole world.
Something happens when a woman becomes a mother. I don't even think I have the words to describe it. There is a quote I run into once in while, from Elizabeth Stone:
"Making the decision to have a child is momentous. It is to decide forever to have your heart go walking around outside your body. "
How true--right? You carry this little life inside you for months--and then, quite suddenly (even if your labor is 36 hours!), they are outside in the world, with germs and danger and mean people and dark, scary things. And you are a mother. You are "Mom." There are million parenting books written, there are loads of lovely role models and people waiting with advice; but there is no way to really learn motherhood. You just have to do it.
There is absolutely no how-to guide for mothers of cancer patients and survivors. (I've looked, extensively). There are medical books and other pieces entitled, "So, you have a brain tumor, " or one of my favorite things--the "Welcome to Neuro-oncology gift bag," that included a stuffed dog and a book called "The Jester Lost his Jingle." The book is cute--but it does not even come close to telling parents how to be cancer parents. It is a lonely place.
But there are mothers like Liz Scott, who exhibit courage and strength along with vulnerability and fear. When I first heard Liz Scott speak, I was inspired to take up my cross and fight. I was reassured that everything I was doing was okay--because I loved Lily. I was also reminded that Lily has cancer and so do thousands of other children--Lily's fight would reverberate--and we weren't just fighting for our daughter--we were fighting for all the children and their mothers. And most important, while I would fight for my daughter--it was her fight and her victory. I was reminded that I am Lily's Mom.
Lily's Lemonade Stand on June 12, is her stand. Mike may have cut the wood and built the stand. And I may have sent out a million emails and two million press releases. But the lemonade you buy--that is Lily's Lemonade. And in her words, "All the sick kids drink loads of lemonade and they will get better."
It is as simple as that.
All of my love and gratitude,
Lily's Mom
Posted by Trish Adkins at 10:51 AM